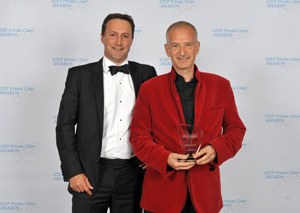 Among others, Philip Marcovici received the Citywealth Magic Circle Lifetime Achievement Award in 2009 and, jointly with Fritz Kaiser, the Wealth Management Innovator award in 2011 for his work in instigating the Liechtenstein Disclosure Facility. In 2010 Philip received the Russell Baker Award from Baker & McKenzie in appreciation for his exceptional contributions to the firm’s Global Tax Practice.

Philip Marcovici received an award from the Singapore Management University as Top Adjunct Faculty for the 2018/2019 Academic Year for his work as a lecturer in the university’s Master of Science  in Wealth Management programme.

Through an independent and rigorous judging process the PCAs set the industry standard for excellence in private client practice. Winning a STEP PCA has proved to be a clear mark of quality in the private client sector, offering international recognition and credibility.

The Judges said: ‘Philip has been one of the industry’s pioneers, at the forefront of advising on the dramatic changes in tax disclosure and the development of tax amnesties. In particular he was instrumental in the development of the successful Liechtenstein Disclosure Facility, and the approach, which he initiated and designed, is now the basis for other similar arrangements with the Isle of Man, Jersey and Guernsey. He has helped so many building their careers and is an inspiration to those following in his footsteps.’

More than 650 private-client professionals attended the Awards Ceremony, held at London Hilton on Park Lane hotel, which was hosted by Clare Balding, BAFTA Special Award winner and RTS Presenter of the year.

Chair of the Presiding Judges Paul Stibbard TEP, commented: ‘This year’s competition raised the bar for the depth and quality of entries from an increasingly international arena. This should act like a beacon for exceptional practice, shining across the more challenging fiscal and economic conditions many professionals now face.’

The event supported international charity Feed the Minds for a third year, raising GBP84,939 for the charity, which works with local partners in developing countries, delivering education projects to help save lives, reduce poverty and transform communities.

The Awards were live-tweeted on @STEPSociety (#STEPPCA) announcing the 15 firms and five individual winners as the night’s events unfolded.

Click here for the STEP interview with Philip Marcovici.